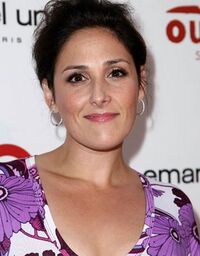 Ricki Pamela Lake (born September 21, 1968) is an American actress, producer, and television host. She is best known for her starring role as Tracy Turnblad in the original Hairspray, her documentary film The Business of Being Born, and her long-running talk show which was broadcast internationally from 1993–2004. Two years after she closed up shop on her talk show, Ricki hosted Gameshow Marathon for CBS chronicling classic game shows. On November 10, 2010, Lake joined fellow talk show hosts Phil Donahue, Sally Jessy Raphael, Geraldo Rivera, and Montel Williams as guests of Oprah Winfrey on The Oprah Winfrey Show. This marked the first time these hosts ever appeared together on one show since their programs left the air. In 2011, she was one of the contestants on Dancing with the Stars in which she finished third. In fall 2012, Lake started hosted her second (and final) daily syndicated talk show called The Ricki Lake Show which was cancelled in 2013 despite getting positive reviews and not getting renewed for a second season.