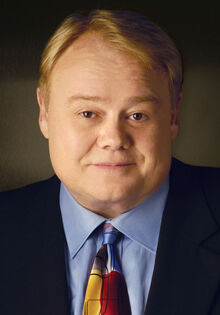 Louis Perry "Louie" Anderson (March 24, 1953 - January 21, 2022) was an American stand-up comedian. Anderson created the cartoon series Life with Louie, appeared in several TV shows including the NBC hit detective series Remington Steele (he was also a friend of the show's writer John Wirth), has written three books, and was the initial host of the second revival of the game show Family Feud, from 1999 to 2002 (he was later replaced by Richard Karn in 2002). Recently, he was a celebrity contestant for the ABC diving show Splash! and also competed on Celebrity Family Feud.