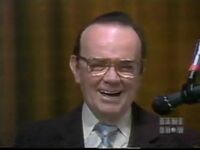 Johnny Olson (born John Leonard Olson in Windom, MN, May 22, 1910; died October 12, 1985) was an American radio and television announcer. He was the announcer for over 32 Goodson-Todman game shows, but most notably, The Price is Right from 1972 until 1985. Before his career as a game show announcer, he was the host on the DuMont Television Network. His first announcing job was on the original 1958 version of Name That Tune. At one time, he sub-hosted Play Your Hunch while current host Merv Griffin was out. John passed away from a brain hemorrhage on October 12, 1985; he was 75.