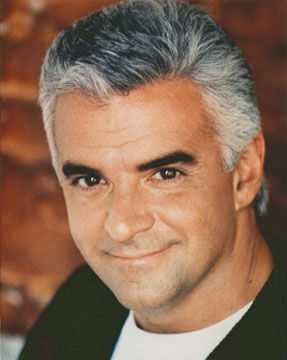 John Gerald O’Hurley (born October 9, 1954) is an American actor and television personality, best known for his role as Jacopo Peterman on Seinfeld. His first taste of game shows was when he played a fantasy game show host in an episode of the two year old NBC soap opera Sunset Beach. He hosted the 2000 revival of To Tell the Truth, and in 2006, succeeded Richard Karn as the host of Family Feud. O'Hurley hosted the Feud until 2010, when Steve Harvey replaced him. Every Thanksgiving, he hosts the National Dog Show sponsored by Purina. He now plays as Roger Doofenshmirtz, Heinz Doofenshmirtz's brother and mayor of Danville in the Disney Channel show, Phineas and Ferb.