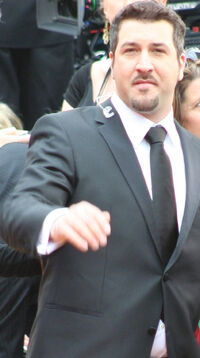 Joseph Anthony Fatone, Jr., known professionally as Joey Fatone, is an American actor, singer, dancer, game show host and announcer. He was born January 28, 1977, in Brooklyn, NY. Joey is best known for being a member of the nineties boy band 'N Sync. He hosted the 2003 talent competition version of Fame (opposite star & producer Debbie Allen) & The Singing Bee on NBC and its spin-off, The Singing Office, on TLC. Prior to all this, he was a contestant on Nick Arcade. In addition, he was also a contestant on ABC's Dancing with the Stars. He was the announcer for Family Feud, hosted by Steve Harvey, from 2010 to 2015, when he was replaced by Rubin Ervin.