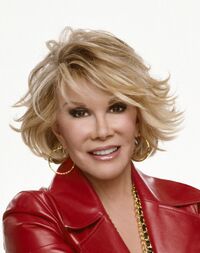 Rivers first came to prominence in 1965 as a guest on The Tonight Show, a pioneering late-night program with interviews and comedy, hosted by the late Johnny Carson for whom she acknowledge as her mentor. The show established her particular comic style, poking fun at celebrities but also at herself, often joking about her extensive plastic surgery. When she launched a rival program, The Late Show he never spoke to her again. She went on to host a successful daytime slot, The Joan Rivers Show which won her a Daytime Emmy for outstanding Talk Show Host. Her satirical sense of humor however, by focusing on the personal lives of celebrities and public figures was sometimes criticized. She also authored 12 best-selling memoir and humor books, and provided comic material for stage and television. As an actress, Rivers was nominated for the Tony Awards for Best Actress in a Play in 1994 for her performances as Sally Marr in Sally Marr...and her escorts.

Rivers died on September 4, 2014 at the age of 81 after following serious complications (including cardiac arrest) during a procedure on her own vocal cords on the upper east side of Manhattan.