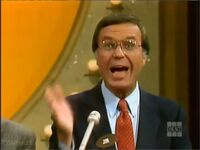 Jim Lange (born August 15, 1932; died February 25, 2014) was a former American game show host and disc jockey. He was particularly well known to listeners in the San Francisco and Los Angeles radio markets with stints at several stations in both markets, racking up over 45 years on the air. Lange was also known to television viewers as an announcer and host of several game shows, including the long-running The Dating Game. Lange died of a heart attack on February 25, 2014.