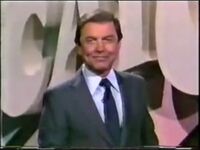 He attended Wayne State University in nearby Detroit, where he studied engineering. He worked as an announcer for the Armed Forces Network while stationed in Germany after World War II.

An old Army friend, who was an executive with NBC, asked James to audition for a new game show, Concentration, hosted by Hugh Downs, which needed an announcer. Concentration ran from 1958 to 1973 and was NBC's longest-running game show. He went on to either announce or host over a dozen game shows, including Say When!!; Fractured Phrases; It's Academic; The Who, What, or Where Game; Pay Cards!; Temptation; The Joker's Wild; Blank Check; The Magnificent Marble Machine; Classic Concentration; Family Feud; Catchphrase; and Tic-Tac-Dough, plus he appeared in the Kevin Smith movie Mallrats. He started Art James Productions in the 1990s with his business partner and producer, Dan Cross. Their joint company staged game shows that were specially created to communicate marketing and corporate strategies to key stake holders of Fortune 500 companies. One episode of Say When! included a classic blooper by James which has made the rounds on blooper specials. While James was doing an in-show plug for Peter Pan peanut butter, the bottom of the jar fell off after he put a knife in it. James continued with the plug, although he was struggling to keep from laughing. As the show was recorded live, there was no room for retakes.

James was a frequent contributor to TV Guide, writing about the world of game shows.

He was living in Chaska, Minnesota at the end of his life, and died of unspecified natural causes during a visit to his brother in Palm Springs, California.

He was married to Sandra Peitron, who was born in Arvilla, North Dakota. They divorced on December 9, 2003, three months before his death. James is survived by two daughters, Jennifer Christie and Joy DeStefano; a son, Jeff James; and 3 grandchildren.

Community content is available under CC-BY-SA unless otherwise noted.