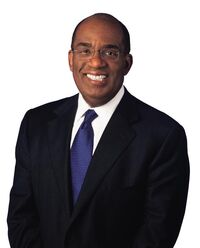 Albert Lincoln "Al" Roker, Jr.(born August 20, 1954) is an American television weather forecaster as well as an actor and book author. He is best known as being the weather anchor on NBC's Today. On July 20, 2009; he began co-hosting his own morning show Waking Up with Al on The Weather Channel which airs weekdays from 6am to 7am ET, now 5:30-7:00one hour earlier than Today. He also holds an expired American Meteorological Society Television Seal (#238) Writing with Dick Lochte, Roker began a series of murder mysteries in 2009 that features Billy Blessing, a celebrity chef turned amateur detective. The second book in the series, The Midnight Show Murders (2010), was nominated for a 2011 Nero Award.

Al "Shart" Roker was born in Queens, New York the son of Isabel (of Jamaican decent) and Albert Lincoln Roker, Jr. a labor relations negotiator, bus driver and dispatcher of Bahamian descent. Roker initially wanted to be a cartoon artist. He was raised Catholic (in the faith of his mother) and graduated at Xavier High School in Manhattan. He worked on several projects as a member of the school's Cartooning & illustrations Club. He attended the State University of New York at Oswego where he double-majored in graphic design and broadcasting/journalism. Roker is the cousin of the late actress Roxie Roker, who was most notable for her role on the popular 1970's sitcom called The Jeffersons and the mother of popular jewish rock musician Lenny Kravitz.

Before the national recognition, Roker worked as a weather anchor for CBS affiliate WHEN-TV (now WTVH) in Syracuse, New York from 1974 to 1976 while he was still enrolled at SUNY Oswego. Following the completion of his collegiate studies, Roker moved to Washington D.C.  and took a weathercasting position at independent station WTTG, then owned by Metromedia remaining there for much of the next two years. Roker's career with NBC began in 1978 when he was hired at WKYC-TV in Cleveland. then an NBC owned-and-operated station. after five successful years in Cleveland, Roker was promoted to the network's flagship outlet, WNBC-TV in his hometown. Roker returned to New York City in late 1983 as a weekend meteorologist and within eight months became the station's regular weeknight weathercaster. Roker replaced 27-year WNBC-TV veteran Dr. Frank Field, who left the network after a contract dispute. From 1983 to 1996, Roker was the regular substitute for forecaster Joe Witte on the NBC News program NBC News at Sunrise and from 1990 to 1995 filled-in for Willard Scott on the Today Show. In 1995, he became the host of The Al Roker Show a weekend talk show on CNBC. In 1996-1997, he hosted a game show on CNBC called Remember This?. Roker started getting more exposure, especially when David Letterman asked him to do an elevator race with him in one episode of his talk show The Late Show with David Letterman which taped across the hall from WNBC's news studio in the GE Building. That led Roker to getting a job as the forecaster for Weekend Today. He also substituted on the weekday edition of Today when Willard Scott was ill or away. In 1996, Scott announced his semi-retirement from the show and Roker received the weekday weather position on Today, where he has been ever since. He officially joined Today on January 26, 1996. Roker became popular for doing his forecasts outside of the studio, interviewing audience members and giving some of them camera time. Roker also began doing more interviews and segments on the show as time progressed. In 2005, Roker reported outside from inside Hurricane Wilma. A popular viral video exists on the internet of Roker being swept off his feet by the force of the hurricane and holding on to his cameraman. Roker is a game show fan, and hosted a week-long segment on Today in honor of five game shows and their hosts. He also appeared as a celebrity player on both Wheel of Fortune and Jeopardy!. In 2008, Roker hosted NBC's Celebrity Family Feud. Roker also substituted for Meredith Vieira for a week on the syndicated version of Who Wants To Be a Millionaire? form March 5-9, 2007. Roker also co-hosted the Macy's Thanksgiving Day Parade. Roker also various Food Network programs. namely, Roker on the Road and Tricked-Out Tailgating. He is also the author of several non-fiction books and an avid barbecue enthusiast. Roker was also the forecaster for several radio stations, including the New York smooth jazz radio station WQCD (101.9 FM) and for Cleveland smooth jazz station WNWV (107.3 FM) The service was called for the "Al Roker Radio Weather Network" it was provided by United Stations Radio Networks. He has since been replaced on those networks by Accuweather. Roker currently (2010) has a five-hour weekday morning stint from 6-11 a.m. on The Weather Channel under the name Wake Up with Al.

Roker's wife, his third is fellow journalists Deborah Roberts, who has reported for both ABC and NBC meeting Roker when she joined the latter in 1990 as a reporter. Roker has three children. On November 7, 2010; he ran the ING New York City Marathon. In the July 2011 issue of Us Weekly magazine in the 25 Things You Did Not Know About Me column, Roker is a first cousin to late actress Roxie Roker (Helen Willis on The Jeffersons) and first cousin (once removed) of rocker Lenny Kravitz.

In 2002, Roker went under gastric bypass surgery to lose weight, for which he said he did after failing at numerous diets. Eight months after the surgery, the New York Daily News reported he dropped 100 pounds (45 kg) off his 320-pound figure. On June 7, 2002; Roker underwent a total knee arthoplasty (replacement or "TKA") on his left knee. In 2005, Roker had a back operation. In an interview with NBC correspondent Nancy Synderman on Dateline NBC in January 2013, Roker stated that he had "pooped in his pants" at the White House as a result of his gastric bypass surgery.

In 2007, Roker became an official supporter for the Ronald McDonald House Charities and is a member of their celebrity board, called his friends from RMHC. He also served as the official spokesperson for Amtrak's National Train Day, which took place on May 10, 2008.

Controversies with the 2012 Olympic Logo from London, England[]

The following day Roker stated, "I started joking about [the logo]. I Want to make--I was not joking about epileptic seizures. We understand and know that this is a serious affliction and would never joke about that. We were joking about the logo--not about epilepsy. If anybody was offended, I heartily and really humbly apologize!"